Teutonic forces were by now overwhelming Albionian defences. At the Running River however it’s soldiers faced a problem in being able to secure a crossing. However, one bridge offered a chance for a bridgehead from which to continue their advance. Piecemeal, a lead platoon dashes over the bridge before the Albionians could mount a counter attack. 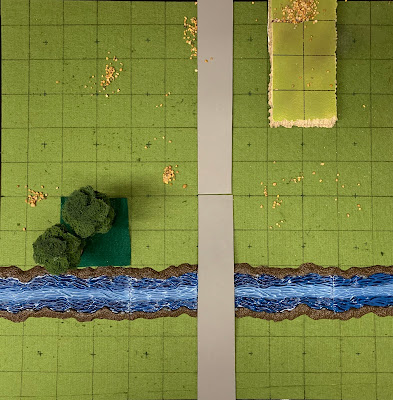 3 Platoons of 3 units each. 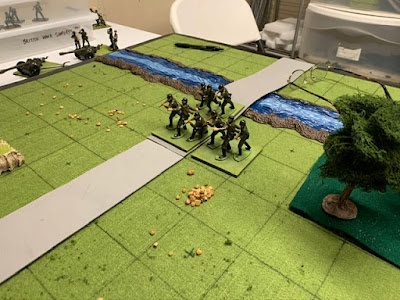 Meanwhile, Albionian forces were quickly made aware of the Teutonian intentions due to a small section of infantry watching the nearby bridge. Before long, reinforcements from all quarters were on their way to the rescue. 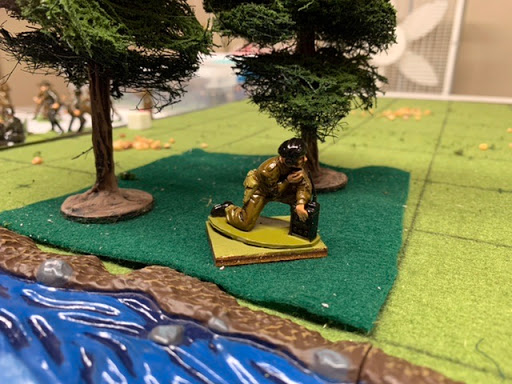 4 Platoons of 3 units each.

An Albionian Platoon (1st) appears from the west with a mortar section). The Teutonians draw a 5 and 2 units head for the woods. 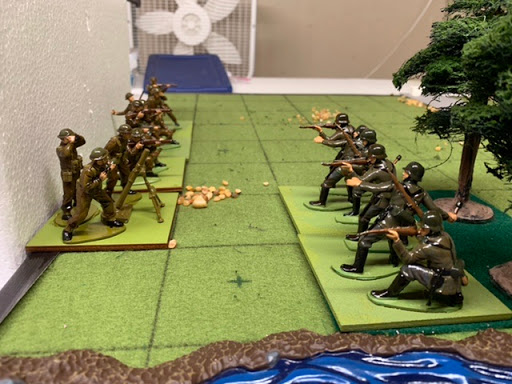 The Teutonian’s draw a 6! The 2 units push ahead and engage the enemy (I am playing sudden death - blood thirsty am I). They roll a disappointing 3 vs the mortars. Meanwhile, the Teutonian mortar section appeared and quickly moved to the bridge.

Devil take it. The Teutonians drew a 6 again! Sadly their marksmanship drew a blank again. The rest of the force moved up. More Albionian infantry reached their jump off points.

A joker means the cards are shuffled. Maybe the Albionian luck will change? Nope, the Teutonians once more draw a 6. More shots are exchanged and more men head for the bridge. Finally, the Teutonians hit the mortars and remove them from the battle.

Finally the Albionians draw and 8. The rest of the Albionian defences turn up. Including a tank. Within a twinkling they advance and attack the wood. Meanwhile the second Teutonian anti-tank section is blocked from entering the battlefield. 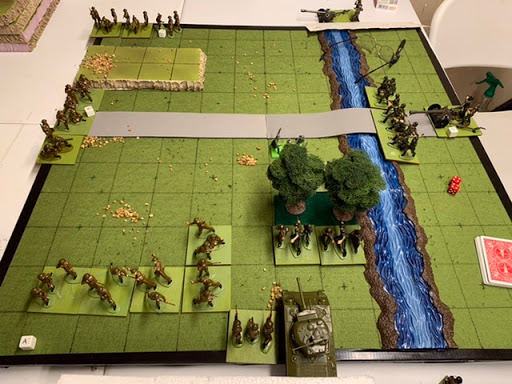 A Joker forces a card reshuffle. Now the Albionians draw a 6 and they continue their advance. This time the hapless Teutonians are blasted out with two 5s to hit and 1 and a 2 making two dead infantry. The last of the Teutonians have arrived but are stuck behind the anti-tank guns!

Another Joker. Albion draws a 6 and continues its relentless advance. The Teutonian mortar team get a nasty shock! 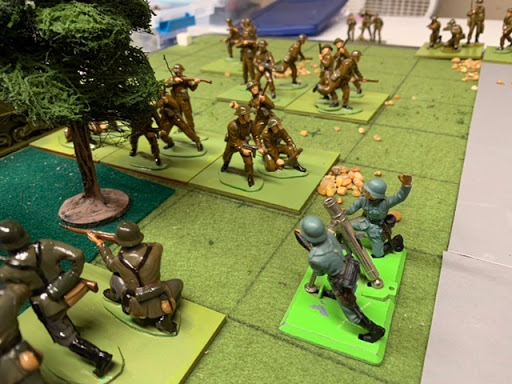 The Teutonians now have a chance when a black 7 is drawn. Wisely or not the rest of their force rushes for the bridgehead.

The Teutonian gamble pays off when they draw a 5. The mortar moves back a little and let’s fly (2 = miss). The infantry however eliminate the infantry they were aiming for.

Albion draws an 8. Two platoons are moved up whilst there is continuing skirmishing around the wood.

Teutonians draw a 7. As they advance, the lead Albionian section is forced to retreat. The majority of the Teutonians are across the river. This will make things hard for the Albionians to repel them.

Teutonians draw a 6. Their marksmanship is uncanny and two more Albionian infantry units are removed from action.

Albion draws a 7. A plucky section close assaults the spearhead of the Teutonians in the flank and win the scrap. The Albionians then charge at the enemy beyond them and chase those off. Naturally there is a pursuit, but this time both sides roll a 5 and both sides are eliminated! This gives the rest of the Albionian force a chance to advance. 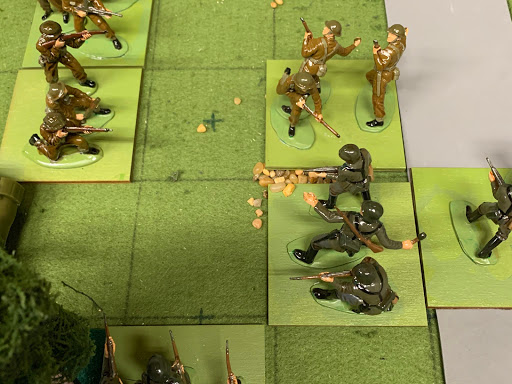 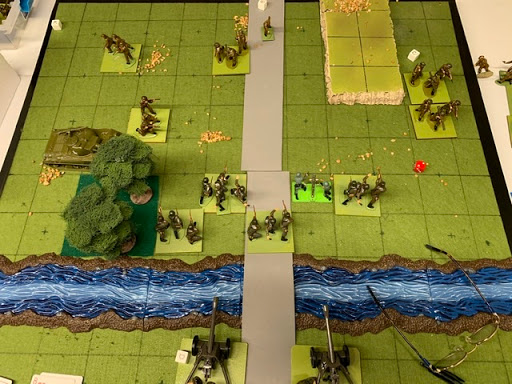 The deadly fusillade halted the Albionian advance in its tracks. They had now reached their exhaustion point. Even though they drew an 8, all they could do now was to fire desultory shots at their enemy. The Teutonians had won again!

I used Portable Wargame Modern Vanilla with the sudden death option. Does this make a short, vicious, uncertain game? Yes. Your point? The OHW scenario list provided the battle. The only change I made was to turn the units into three units. My thinking was that each would represent a section within a platoon. This might have created an infantry heavy battle, but then I was playing a infantry company level game. There were supporting arms, but with the exception of one mortar team, they did little. The Teutonians had their usual luck. I am impartial but I think it is time for an Albionian win, don’t you?