“Take the high ground”. These were Captain Scarlett’s latest orders in the ongoing campaign to repel the Teutonians from Albionia’s green and pleasant land. The Teutonians had recently captured and occupied a prominent hill next to a main road that ran in the direction of the enemy invasion. If the hill could be taken, then it would be easier to thwart and advance.  Company A was going to be fully committed with the HQ and all three rifle platoons. In addition, battalion and brigade had loaned a mortar and a heavy machine gun (HMG) section respectively. 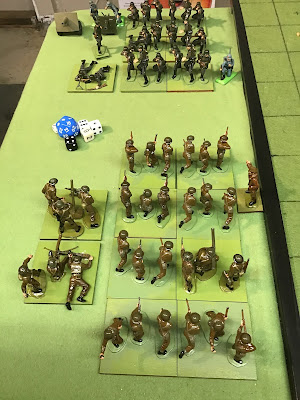 Meanwhile...
Franz and Willi shivered in their foxholes staring down the valley. Their platoon along with another were dug in and concealed.  Reinforcements were supposed to be on the way, but nevertheless, Willi made some stupid comment about “vanting to be home in der Farzerland”. Franz cussed him out. “Don’t you know zat ven ever anyvon says dat, der Albionian pig-dogs attack?” He would have felt better if he had known that a mile or so behind, Kapitan Schwartz, along with another remaining platoon, a HMG section and an infantry gun were on their way. The enemy must not be allowed to seize the hill. And just to help out further a battery of cannons were available for support.
For this battle I decided to go back to ‘Up the Blue’. The scenario is the fourth in OHW and I have been reading up on tactics to better understand potential strategies for both sides. I decided that Scarlett would probably use a gambit move with one the platoons, with two behind in a triangle formation. The rest of the force would be in reserve until contact was made, possibly working around the hill.  Meanwhile, Schwartz’s men on the hill would stay hidden until they saw the whites of the enemy’s eyes. The reinforcements would attempt to use their firepower to prevent the hill garrison being overwhelmed.
Turns One and Two

The Albionians fanned out as the Teutonians on the hill stayed put. Schwartz appeared on the horizon, but so far there was no action. 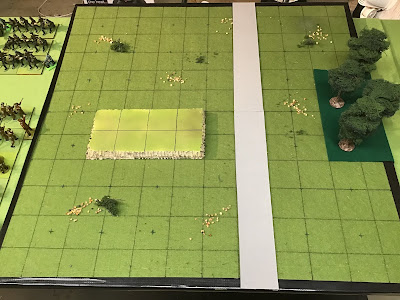 Turn Three
Schwartz won the initiative and let fly with the infantry gun at the Scarlett’s 3rd platoon with two hits. Great start. His HQ platoon, complete with an artillery forward observer (FO) moves towards the woods along with the HMG section. But not so close as to be in line of sight (LOS) of the Albionian HMG.
Scarlett’s entire company boldly advanced on the hill. 2nd platoon switched to ‘tactical’ moves, but since they could still no see the enemy they could not fire unless the Teutonians did. Meanwhile, 1st platoon attempted to sneak around the hill. The mortars opened fire on the infantry gun but only inflicted one point of damage. 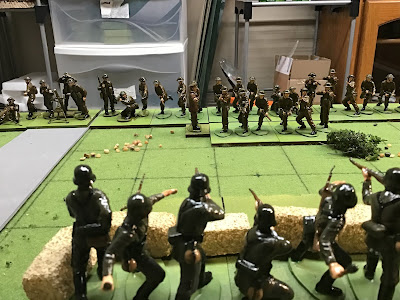 Albionian’s A Company prepares its assault


Turn Four
Scarlett had the initiative this time. It was time to finally attack the hill. 1st platoon advanced and were fired on by the Teutonians (3, 5, 6, 6 + 1,  3, 4, 6 = 5 hits). Since this was in the same volley from two separate units I counted this as one attack and therefore the unit received a permanent hit (a higher level of severity, this limits a units ability to rally to full strength and its combat ability). 2nd platoon reacted weakly with one dice (3 - 1 vs dug in -1 for the permanant hit) and scored no hits on the enemy. But, at least Scarlett knew where the enemy was now! 1st and 3rd platoons moved forward but could still not see past the crest in order to attack.
Schwartz ordered his FO to contact the Medium Battery to the rear to fire on the nearest large enemy unit, 3rd platoon. They roll 4 dice (1, 2, 4, 5 for 2 hits). The rules say that the number off attack dice goes down by the number missed the next time it fires.  Schwartz then ordered the gun to fire smoke on the enemy HMG whilst his HMG ran into the woods. 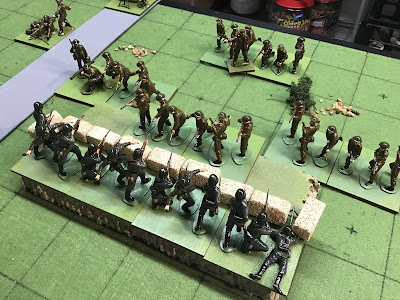 2nd Platoon’s foolhardy assault
Turn Five
Things were not going right for Scarlett. Schwartz won the toss and the chaps on the hill blazed away at poor old 2nd platoon (3, 3, 4, 6 = 2 hits; 1, 2, 5, 5 = 2 hits). 2nd platoon dissolved and fell back in full disorder towards the field latrines. The FO ordered in another salvo, only 2 dice but a 2+ would be a hit for firing on the same target (4 and 6 = 2 hits). 3rd platoon were not happy. The infantry gun joined in (two 4s) platoon ran after 2nd platoon! 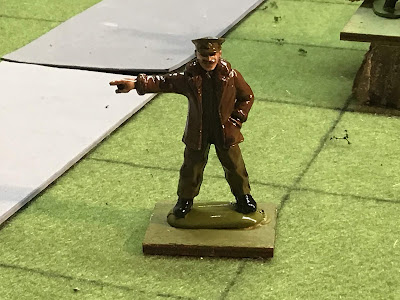 Scarlett was hopping mad!
Scarlett was now hopping mad. As fugitives ran past him he focussed the remaining platoon to work around the western side of the hill as the mortar and HMG engaged what they could. The HMG fired on Schwartz and his platoon inflicting just one hit, but the mortar added another two. It was time to get under cover. Meanwhile 1st platoon swung around and attacked the western most foxholes on the hill. Albionians had 3 dice - 1 for fighting against dug in troops but another 1 for being in ‘touch’ and since they were fighting against the rear of the enemy they needed only a 3+ to hit. Conversely, even though the Teutonians had four dice, they needed a 5+ to hit back. Albionians (3, 6, 6 = 3 hits), Teutonians (4, 6, 6, 6!!!). Even honours.
Turn Six
The gods of war favoured Kapitan Schwartz as yet again he won the initiative. The beleaguered Teutonian platoon on the hill returned fire on 1st platoon (1, 2, 2, 6 = 1 hit). The FO ordered artillery on to the enemy HMG (5, 6 = 2 hits). The gun turned its attention to 1st platoon and inflicted a hit on them. Schwartz finally decided that he needed his main efforts on the western side of the battlefield.
What could Scarlett do? 1st platoon were reluctantly pulled back in the hope they could be rallied. The heavy weapons units however were presented with a juicy target as Schwartz moved his reinforcements across the road (HMG 3, 4, 6 = 2 hits, mortar 5, 6 = 2 hits!). Once again, Schwartz had a whole unit dissolve around him. The odds were now even. 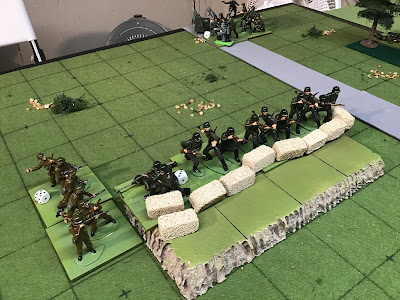 Or at least they would have been if Schwartz didn’t have the luck of the devil. A new FO link was set up with a platoon on the hill. The Teutonians fired at the Albionians trying to fall back (2 hits) and 1st platoon melted away. Finally, the infantry gun lobbed a shell at the Albionian HMG (5, 6 = 2 hits). 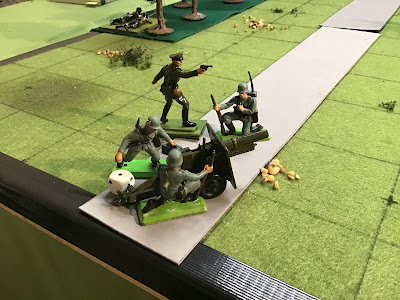 The infantry gun swings into action

This was the point that Scarlett stared in disbelief at the mess that the attack had become. He had an intact infantry platoon and mortar section, but the HMG section had taken a lot of damage. With the enemy still firmly ensconsed on the other side of the hill crest it would take a miracle. The HMG section rolled a Quality Test and won a hit point back. The mortar sent off a round towards the infantry gun and scored 1 hit.
Turn Eight
Schwartz once again won the initiative. The FO called down the medium artillery, this time on Scarlett and the HQ platoon (2, 6 = 1 hit). The artillery only had ten more rounds at this point. Meanwhile the infantry gun inflicted two hits on the poor HMG section, only one more hit and they would be gone too!
Courageously (foolishly?) Scarlett led the HQ platoon forward. The mortar section laid on smoke. This was going to be a do or die mission. 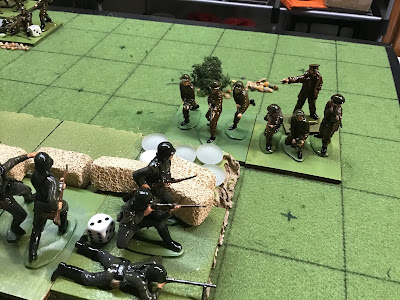 Turn Nine
No luck Scarlett. Initially, the Teutonian FO called down fire on the Albionian HMG who finally disappeared.  The dug in Teutonians fired on Scarlett as he urged his men forward. Despite the smoke, damage was inflicted (4, 5 = 2 hits). The infantry gun added to Albionia’s woes by attacking their mortar section (5, 6 = 2 hits).
With a mighty cheer, HQ platoon assaulted the hill (1, 3, 3 = 0 hits!). At least the mortar was able to score one on the other Teutonian unit on the hill (I had decided that the Teutonians were getting all the breaks here and allowed the mortar one dice despite them being technically behind the crest of the hill).
Turn Ten.
Finally Scarlett won the initiative. This time the HQ platoon rolled high (4, 4 and 6 = 3 hits). The mortar failed to work any magic this time.  Then. The Teutonian medium battery fired once again and the remaining Albionian heavy weapons were sent packing. The battle against Scarlett however was less effective (2, 2, 2, 6 = 1 hit). The other platoon however seized the moment and swung round into the flank of Scarlett and the gallant HQ platoon (2, 3, 4, 6 = 2 more hits).
Turn Eleven
Scarlett called for one more effort but it’s was futile (1, 2 and 2). Before he knew it, a guttural voice in his ear said “for you the var ist over”. Scarlett was in the bag!

What went wrong for the attackers? If anything why did everything go right for the defence? Constant futile frontal assaults obviously. Here I was role playing the situation of not knowing what was on the other side of the hill. On balance, the Albionian’s should have tried to envelop the hill under smoke cover, even though there was little room for maneuver on either side of the hill. The Teutonians were ruled to be dug in behind the slope and therefore were in a very strong position and the support of artillery ensured that the defense would be practically invulnerable. Add the fiendish luck of Schwartz in winning nearly initiative and it was inevitable that Scarlett would lose.

What about Scarlett? I think a daring escape attempt is in the offing.
Posted by Steve8 at 10:35 AM